What is eDemocracy and how does it compare to polls and surveys?

Have you ever heard the term 'eDemocracy,' and wondered what it meant?

This blog is part of a series of the top questions that came out of Ethelo eDemocracy's recent Webinar, Top Ten Questions About Carbon Budgets and Public Engagement, where we discussed how governments can better engage their residents in GHG reduction strategies.

Lately, the rapid development of digital technology has led many to fear the ‘end of democracy.’ While there’s certainly reason to be cautious, technology has also been seen to open up new realms of possibility, and some are starting to wonder if algorithms and artificial intelligence could, in fact, signal a new beginning for democracy. Enter the rise of eDemocracy: the idea that the communication technologies at everyone’s fingertips present an incredible opportunity for governments to expand the frontiers of civic engagement, collect and analyze public opinion, and build support for complex decisions in ways that just weren’t possible before.

It’s a big concept, so we’ve brought it back to basics by exploring how eDemocracy improves upon polls and surveys, two of the most fundamental methods that governments already use to collect public input. Read the transcript or watch the video below to see an eDemocracy platform in action. Excerpt from the Top 10 Questions Webinar: What is eDemocracy and how is it different from a survey or a poll? And what is Ethelo?

MEAGAN: We tend to get this question a lot when I'm just reaching out to people and chatting with them. It’s an interesting distinction for sure.

BEN: I actually thought it was a useful thought process to think about how we describe this, and it occurred to me that a survey is basically a set of questions that you just ask a whole bunch of people, and you don't necessarily differentiate between which geographic or demographic information is incorporated. You don't necessarily have trade offs that are incorporated. So I would say a survey is the most basic level of engaging people through a platform by asking a series of questions.

A poll is to me a step above that because you're actually making an effort to get a representative sampling that's demonstrated in the results. So, you know, it's not just a series of questions, but you're really trying to weigh the way that those results are presented to incorporate things like demographics, geography, political affiliation, or other kinds of considerations. You’re trying to basically learn a bit more than just, what were the most popular options or what were the kind of responses that you got [of the people who participated in a survey].

And then, eDemocracy is a step beyond both of those things. And this isn't just about our platform or the work that we're doing. The idea of eDemocracy is a combination of those things [polls and surveys], but then adding on this extra layer of understanding a series of different trade-offs, a little bit more of the complexity, having different levels of details so you can see the interrelationship between this and that. You have an understanding of allocation of limited resources, whether it be time or money or space. That to me is the distinction between eDemocracy and a survey or a poll.

The particular thing that Ethelo adds on top of that, which for me was actually a big part of the reason why I was really interested in this organization, is captured in this next slide [screenshot below]. 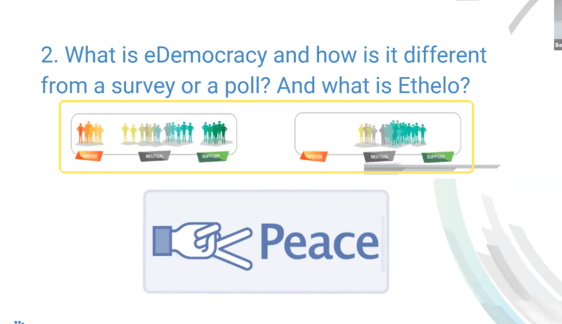 So what you see at the top is a representation of what the algorithm built by our CEO John Richardson is trying to accomplish. What we're trying to do is get to a result that looks more like the one on the right than the one on the left.

If you were just doing a survey you'd get a sense of like, 'What was the most popular option? What was the least popular or what was the distribution?' But what the Ethelo algorithm tries to do is actually attach a score to the voting results so that you're moving away from winners and losers and you're finding the mix of options that are most broadly supported or have the most social license.

I included the little peace sign graphic [above] that sort of looks like Facebook. It’s kind of an interesting thing in today's day and age that whenever we talk about algorithms, it's usually not in a good way. It's usually this conversation recently about how algorithms are being used to divide us into different groups. We all kind of live in our little bubble, we don't hear what people are saying elsewhere. We just see messages that reinforce our own point of view, you know. But this is an algorithm that was designed to actually create a peaceful outcome. It’s looking for a way to get beyond conflict and find resolution to complicated issues. It was that thinking being applied to climate change that basically was the foundation of the idea behind the platform that we are now talking about. So I thought that was an important piece to cover.

Whenever we talk about algorithms, it's usually not in a good way. It's usually this conversation recently about how algorithms are being used to divide us into different groups. But this is an algorithm that was designed to actually create a peaceful outcome.

MEAGAN: I think an important distinction with the Ethelo platform is the transparency that's involved. You can see everything that's happening in real-time as you put in your votes as a participant. You can also chat between participants and really create a dialogue so that you're sharing your own feelings. You can like other people's comments. It’s a really, really cool way to see where your entire community stands. That's not like a town hall where essentially someone can steal the mic and take over with their very passionate views. Although those obviously have a great place and we'll talk about that a little bit later.

ANDREA: Absolutely. My favorite part about the the Ethelo platform is when we grab these complex issues or decisions that we want to make, and we take them with all the complexity that they have, instead of [turning it into a] yes or no situation. The Ethelo algorithm is able to grab all of these different scenarios and then grab the one that's least divisive for everybody. That’s how it creates buy-in. I really really appreciate that part, seeing some of the results of our case studies and how the communities actually see the impact of that.

MEAGAN: And the beauty of it is that you get actionable outcomes, which is so huge. You get reports that say, this is exactly what the public would like to do. And so it's so clear and so easy from there. Clearly I'm passionate about it!

Ethelo’s eDemocracy Carbon Budget platform is a comprehensive engagement and planning solution for communities to plan how they will reach their greenhouse gas (GHG) reduction targets. Our goal is to provide a decision making process that helps to nurture and cultivate the social license that makes meaningful climate action possible.

Itching to know more? Follow this link to learn about the Carbon Budget platform, or watch the full webinar recording by filling out the form below. 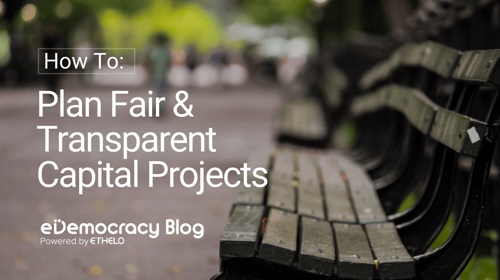 Bringing Fairness and Transparency to Capital Projects
May 14, 2020 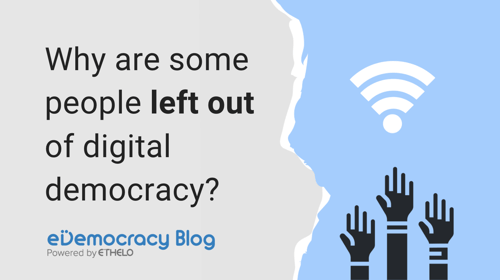 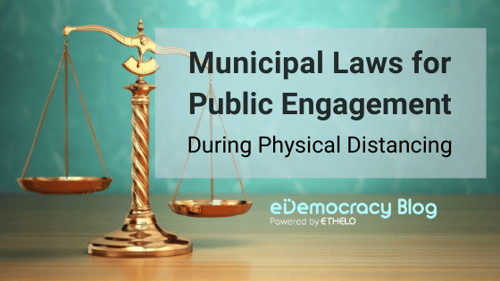