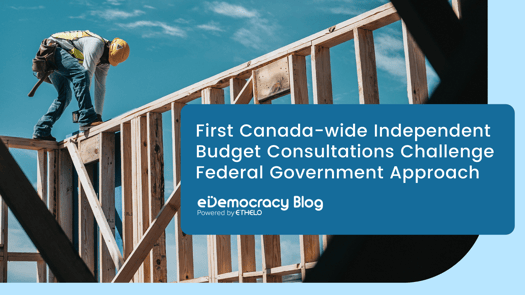 Feb 4, 2021, Toronto —The federal government is missing an important opportunity to gather meaningful feedback from Canadians about how to spend an additional $11 billion for its “once in a lifetime” federal budget, according to an organization that is launching its own cross-Canada consultations on the upcoming “Build Back Better” budget.

The Canada-wide engagement process being launched by the eDemocracy Network and their partners at Corporate Knights on the Ethelo Decisions platform called Help Canada Build Back Better, is the first independent nationwide consultation for a federal budget. This innovative engagement process asks Canadians about many of the same topics as the federal government in their short survey, but unlike the government consultation, which does not include a single number, this independent process allows participants to contrast and compare a wide array of spending options.

Unlike the government’s process, participants have the ability to find a mix of options they would support that gets Canada to its goal of creating one million jobs at the same time as trying to meet Canada's GHG reduction targets. The policies explored on the platform range from universal childcare and electric vehicle support to ending homelessness and boosting green industries. Importantly, this process also gathers input on how people would like to see Canada cover the net costs of these significant investments.

"What really stood out after consulting economists across the political spectrum with expertise in these areas is how affordable it is to build back better post-pandemic with a clean and caring economy. We have many options to cover the incremental net costs, including tweaking exemptions, which on its own, would make it possible to complete the social safety net in Canada, and turbocharge Canada’s clean economy," said Toby Heaps, CEO of Corporate Knights, which partnered with a roundtable of economists and the eDemocracy Network to make the Help Canada Build Back Better engagement process a reality.

He added that all responses from the eDemocracy consultations, along with a final report, will be submitted to the federal government and shared directly with the Finance Minister’s office at the same time that the Federal government's own engagement wraps up on the week of February 19th.  The consultations start this Thursday and will engage a broad cross section of people across Canada, providing a statistically accurate representative sample of Canadians.

“We have a once in a lifetime budget at a critical time in our history and Canadians should have the opportunity to provide meaningful input so we can find a mix of policies that have the social license to succeed,” said Sabrina Bowman, campaign director with the eDemocracy Network. “It is not uncommon even in normal times for some large budget decisions to be made in the final weeks before the plan is presented to the country. Even moving a small amount of this massive budget could have huge implications for all of us. We are calling on all Canadians to get involved and have their say and then please help us spread the word.” said Bowman.

The eDemocracy Network is the sister organization of Ethelo Decisions, a Vancouver based technology company that provides the software platform used for this online engagement process. The core idea behind the Ethelo platform is finding the least polarizing solutions to complex and contentious issues. Starting this week the eDemocracy Network and their partners will begin a coast to coast outreach campaign drawing upon a mix of online and offline outreach strategies ranging from posters and direct mail to online advertising and community organizing.